Windmills in the Netherlands

|First Windmill in the Netherlands

There is only about half of the total land exceeding 3.25 feet above sea level in the Netherlands. Due to this geological characteristic, two-thirds of its area is vulnerable to flooding issues in this densely populated country.

Although the Netherlands is called the land of windmills, Dutch people did not invent the first windmills in the world. However, there are different sayings about the origin of windmills in the world. One of them is the first windmills were probably invented by a Greek, Tesibius, who lived from 285 to 222 BC. Also, the earliest known wind powered grain mills and water pumps were used by the Persians in A.D.  500–800 and by the Chinese in A.D. 1200. And then, Faust Vrančić, who is a Croatian Venetian polymath and bishop from Sibenik, first described vertical axis wind turbines with curved or V-shaped blades in his book Machinae Novae in 1616.

Building windmills is not the first solution Dutch people used to deal with flooding issues. Historically, ancient Dutch preferred to reside near coastal dunes and natural embankments which kept their area from being washed away by the sea. However, this is not a long-term solution and there was a greater demand for arable land with the increase of population. As a result, people in Netherland began building dikes in AD 1,000 to prevent their farmlands and living areas from floods. Later it became even harder to remove excess water in the Netherland because of the increasing land subsidence. Therefore, further drainage methods were needed and finally were accomplished after the development of the first polder windmill in the 15th century.

Windmills are the services that can converts wind power into rotational energy. Historically, the most essential function of windmills in holland is to pumping water out of the lowlands and then back into the rivers beyond the banks so that the land could be farmed. Later, other applications were added, such as making paint, sawing tree trucks, and pressing the oil. Nowadays, those wind-driven water pump has become one of the trademark tourist attractions of the Netherlands. 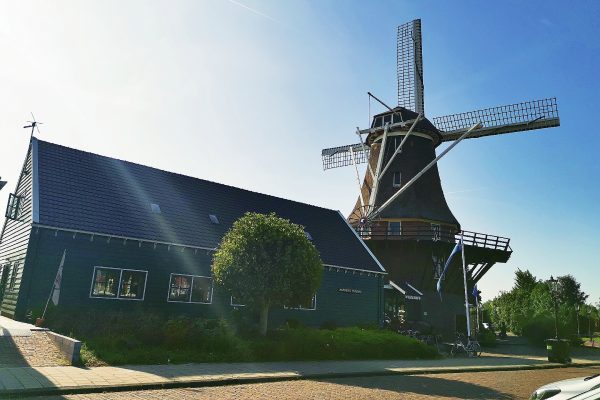 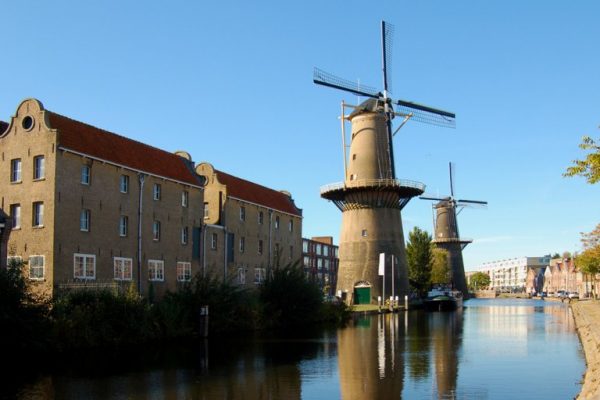 The Windmills of Schiedam

‘De Nieuwe Palmboom’ (The New Palm Tree) is the largest windmill in the world, with heights up to 108 feet. 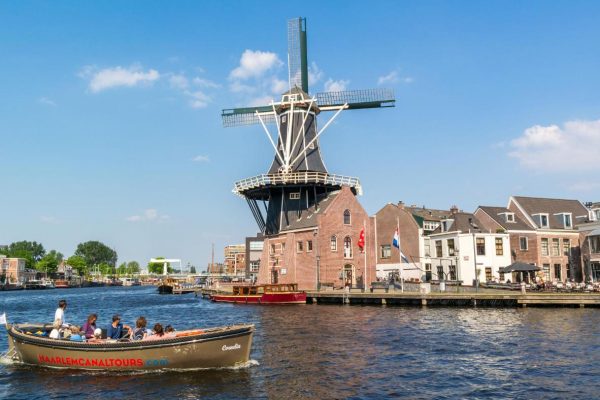 Situated on the edge of the Spaarne River, it was built in 1778 on the foundations of the former fortification around Haarlem.

The First Windmill in the Netherlands

The first windmill in the Netherlands was built in the 13th century and then in the 17th century, the industry of Dutch windmills had experienced a marvelous advanced development.

Historians believe that at the peak of the windmill era, over 1000 mills were operating in the Holland province. This was using wind power on an industrial scale, especially considering that the Holland province has a land area of only 1,030 mi² (2,670 km²). Add to this all the mills were used to pump water to keep the reclaimed land dry, and it becomes clear that nowhere in Europe windmills were so prominent in the landscape as they were in Holland. Some historians have even theorized that the Dutch jumped on the Industrial Revolution train somewhat late because they already had an industry going powered by wind and hence thought it was unnecessary to switch to steam. Along the same lines, the Dutch adopted the train rather late because they had a good transportation network in place using canal boats.