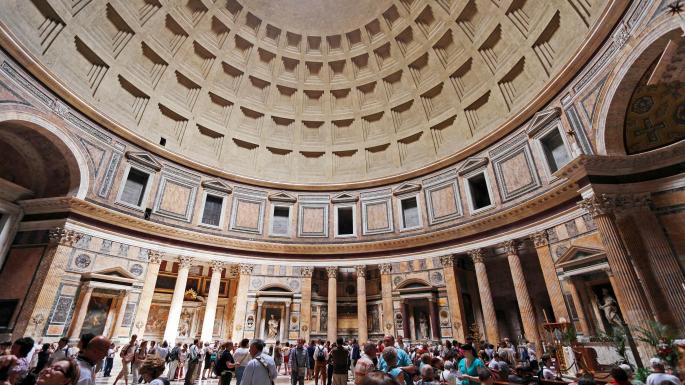 The most utilized building material today is concrete. It can be used in a multitude of construction practices. It is often used for basic road design, but concrete can be used in more complex projects. The Burj Khalifa is the tallest building in the world, topping out at 2,722 feet. The structure was largely built using reinforced concrete [3]. Although the Ancient Roman Civilization were not the ones to discover concrete, they were the first people to widely use concrete as a building material [8].

The Roman civilization began as an Italic settlement on the Italian Peninsula in 753 BCE. At its height in 117 CE, the Roman civilization covered 5 million square kilometers while ruling over 50 to 90 million people which was about 20% of Earth’s population at the time. The Romans controlled parts of Africa, Europe, and the Middle East. This civilization brought many advances into the world including technology, law, art, government, architecture, and as previously mentioned, concrete [15].

The Ancient Roman’s concrete consisted of a mix of volcanic ash or also known as Pozzolana, lime, and water to make a mortar [13]. The mortar was then mixed with the aggregate, often chunks of rock, to create Ancient Roman concrete. Once the mortar and aggregates mixed, they needed to be placed and eventually would harden to give the concrete its strength. The volcanic ash or Pozzolana contains both silica and alumina which proved crucial for a chemical reaction. When saltwater comes into contact with Ancient Roman Concrete, a chemical reaction happens between the Pozzolana, lime, and saltwater to create a rare crystal called Tobermorite [11].

Roman scholar Pliny the Elder described the concrete in contact with salt water as “a single stone mass, impregnable to the waves and every day stronger.” This phenomenon is caused by the concrete structure cracking. This allows seawater to encounter the Pozzolana and lime of the concrete and start the chemical reaction. Once the reaction occurs, Tobermorite crystals are formed in the cracks. This process strengthens the concrete because the crystals allow the concrete to flex rather than shatter when stressed. Over time more cracks occur in the concrete, allowing more and more saltwater to flow into the cracks, causing more Tobermorite crystal formations. This creates a “rock-like concrete that thrives in open chemical exchange with seawater” according to Marie Jackson from the University of Utah [9].

The Pantheon Dome is one of the most famous structures built from Ancient Roman concrete that can be seen in-person today. The dome was completed around 127 CE, during the reign of Emperor Hadrian. The Pantheon Dome was designed as a temple for the Roman gods. The architectural marvel of this structure is the 142.4-foot diameter domed ceiling. At the time of construction, it was the largest dome built. And today it is the largest unreinforced concrete dome. In the middle of the dome, there is a 27-foot oculus. This opening allows the light and weather into the Pantheon. The Romans were very cautious and creative when designing and constructing the Pantheon Dome. The aggregates used in the concrete became lighter as the dome was constructed towards the middle. This allowed the middle of the dome to be less dense thus putting less stress on the dome itself [17].

The Caesarea Maritima was a city and harbor on the Mediterranean Sea in present-day Israel built by the Ancient Romans. The city and harbor were built under Harold the Great in 9 BCE. According to Josephus, “Although the location was generally unfavorable, [Herold] contended with the difficulties so well that the solidity of the construction could not be overcome by the sea, and its beauty seemed finished off without impediment.” Caesarea Maritima became the largest harbor on the Eastern Mediterranean coast. To protect the harbor from the elements, two breakwaters were constructed from Ancient Roman concrete [6]. The northern breakwater spanned about 900 feet while the southern breakwater spanned about 1,650 feet. Multiple methods were used to construct these breakwaters. For the smaller northern breakwater, two methods were used. The first method was to drive stakes into the ocean floor to create a box and then fill it with Ancient Roman concrete. The second and more efficient method was to fabricate the boxes onshore, float the boxes out to the correct position, and sink the boxes. The boxes were then filled with Ancient Roman concrete. For the larger southern breakwater, a third method was utilized. The Ancient Romans constructed barges, floated them out to position, sank the barges, and filled them with Ancient Roman concrete. This is very similar to the box method but on a larger scale [5].

Unlike the Pantheon Dome, the Caesarea Maritima could not last the test of time. Researches concluded that the concrete did not and have enough time to set before the lime was washed-out by-passing waves. Also, after taking cores from the remaining concrete, researchers concluded that the concrete was not mixed well enough. The Caesarea was also constructed over a fault line. The seismic activity eventually caused the breakwater to settle into the seabed. In about the 6th century, the harbor was unusable. Today, the Caesarea Maritima resides in an Israeli National Park and the ruins can be visited [5].

The widespread use of concrete fell with the demise of the Ancient Roman civilization. However, concrete became popular again once Portland cement was created by Joseph Aspdin in England in 1824 [19]. Currently, researchers are exploring how the Ancient Roman concrete technology can be utilized to make modern concrete more durable.