Windmills in the Netherland 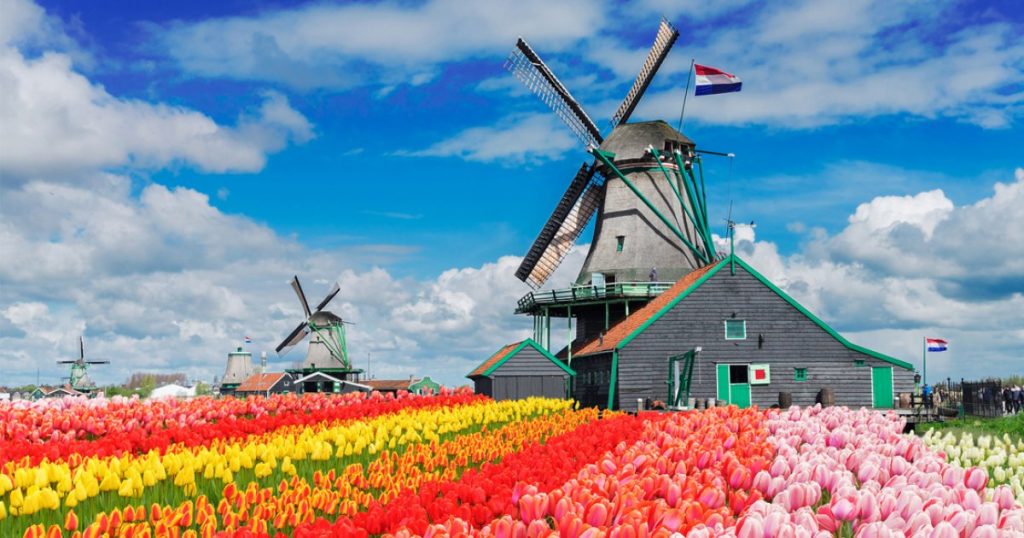 Dutch started building windmills as early as 1,200 AD. to use them grinding grains. In the 19th century, there were more than  9,000 windmills in the Netherland. However, there are only around 1,200 still exist nowadays since fewer and fewer windmills are being used and maintained.

In the past, ancient people build windmills to take advantage of the change and generate power. However, due to the special geographical features of the Netherland, Dutch people built windmills to pump water out of the lowlands and back into the rivers beyond the dikes to deal with flooding issues. In addition to those, windmills have been also used to power many other industrial processes, including paper mills, threshing mills, and to process oil seeds, wool, paints, and stone products.

The Netherland, informally Holland, is a country primarily located in Western Europe and partly in the Caribbean. It borders Germany to the east, Belgium to the south, and the North Sea to the northwest. The mild maritime climate, caused by the predominant wind from the North Sea, is found in the Netherland, creating moderately warm summers but cool winters in this country. The official language in the Netherland is Dutch, with West Frisian and English as the secondary official languages in Friesland and Caribbean Netherlands respectively. 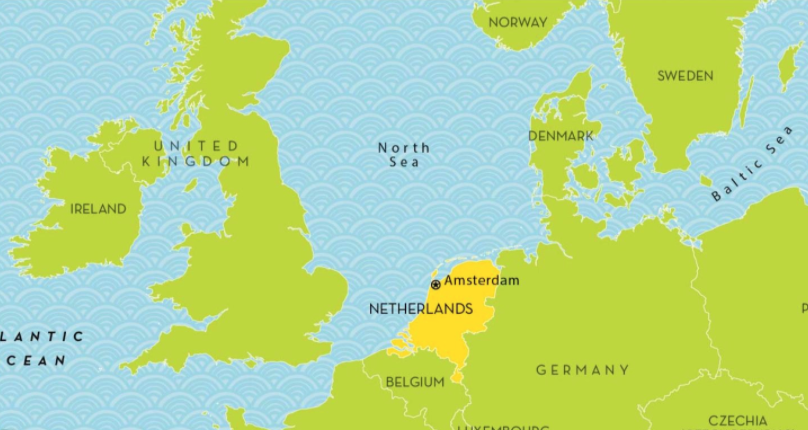 the Netherland on the map of Europe

The name the Netherlands literally means “low countries” due to its low elevation and flat topography.

The machinery of the traditional Netherlands’ Windmills usually includes four elementary components: gear, sail, wind shaft, and brake wheel. Gears inside a windmill would convey power from the rotary motion of the sails to a mechanical device. The sails are carried on the horizontal wind shaft, which can be wholly made of wood, or wood with a cast iron poll end, or entirely of cast iron. The brake wheels are fitted onto the winding shaft between the front and rear bearing. It has the brake around the outside of the rim and teeth in the side of the rim which drives the horizontal gearwheel (wallower) on the top end of the vertical upright shaft.

Different kinds of windmills had their own design. Post mills sometimes have a head and/or tail wheel driving the stone nuts directly, instead of the spur gear arrangement. Additional gear wheels drive a sack hoist or other machinery. Also, the machinery might differ when the windmill is used for other applications than milling grain. For example, a drainage mill uses another set of gear wheels on the bottom end of the upright shaft to drive a scoop wheel or Archimedes’ screw; but Sawmills use a crankshaft to provide a reciprocating motion to the saws. 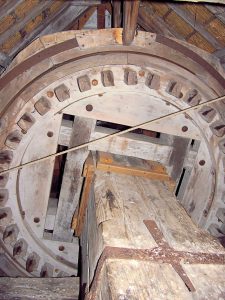 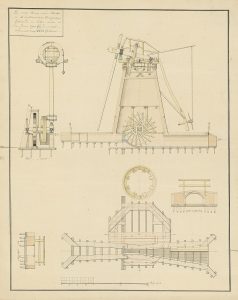 Technical drawing of a 1793 Dutch smock mill for land drainage