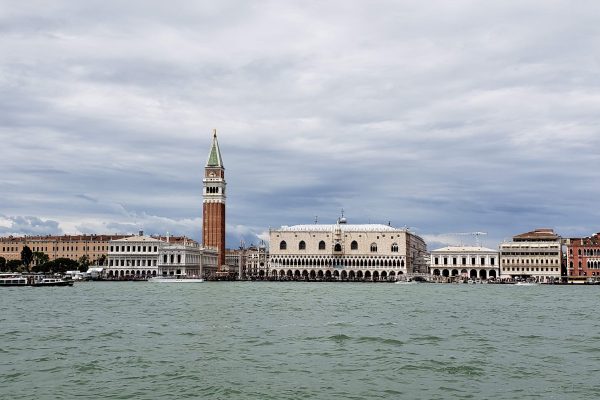 The bell tower of St Mark's Basilica. It is located in the Piazza San Marco. It is one of the most iconic sights of the city! 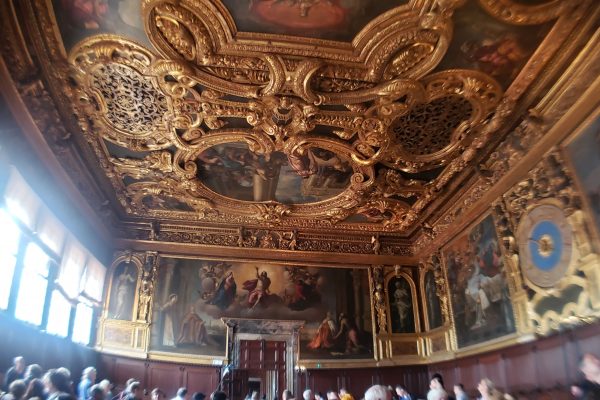 Located on the grand Piazza San Marco, this palace was once home of the Doge (ruler of Venice). 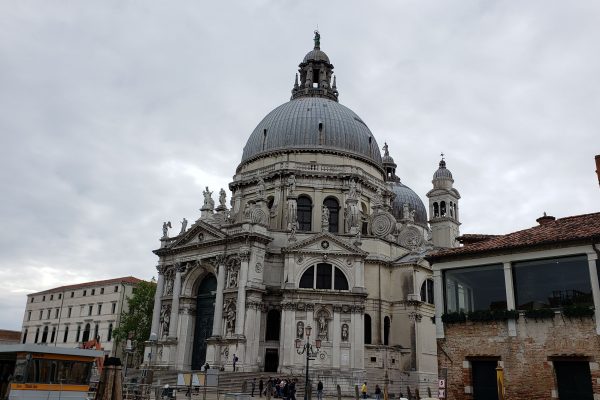 Gondolas are one way to get around the city! They are about 35 feet long, 5 feet wide, and weigh about 1,000 pounds. 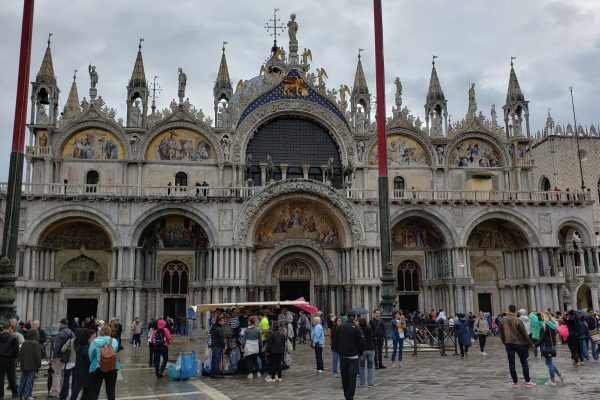 Built in the 9th century, it is a cathedral church of the Roman Catholic Archdiocese of Venice. 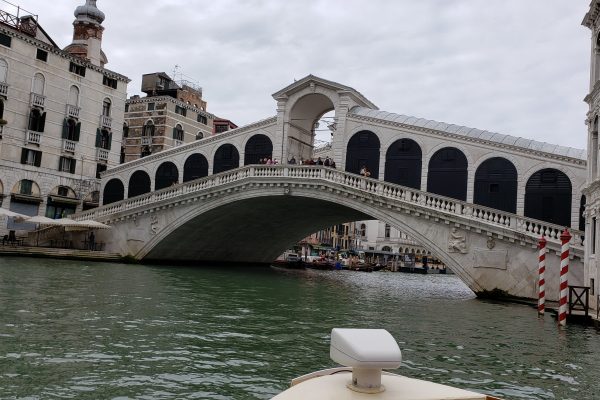 The Rialto Bridge is the oldest of the four bridges spanning the Grand Canal in Venice, Italy.

Venice and its 50,000 km2 lagoon demonstrates the relationship between the people and their environment. Over centuries, Venetians had to have creative foresight to build their city surrounded by water. What lies beneath Venice is an engineering marvel. Venetians strengthened the island by digging hundreds of canals, establishing barriers around the banks, and using wooden piles to protect their land against the sea. Piles were driven deep into the ground, penetrating through the weak sand and mud layers and into hard compressed clay which would later hold the weight of the buildings above. (Crowley & Mutter, 2015)(Tate, et al.)(Momigliano, 2019)

The piles themselves were constructed from water-resistant wood (e.g. oak, poplar, elm, and alder) acquired from the nearby forests on the mainland. However, even with water-resistant wood types, wood exposed to water would be subjected to wood rot. Two factors contributed to the preservation of the wood pilings throughout Venice’s existence – an anaerobic environment and excessive amount of sediment. Just like all living organisms, fungi require oxygen to live (Fissett, 2015). With the pilings submerged in water, air was driven out, preventing any wood rot by fungi (Wise, 2014). The lagoon naturally brought in sediments of silt and soil which were absorbed into and fortified the pilings. (Butcher)(Tate, et al.)

Water will slowly infiltrate the city through its elaborate canal system as the high tide occurs. If the tide is above 80 cm above sea level, it is referred to as a acqua alta (Momigliano, 2019). A mixture of bad weather and strong winds can contribute to higher than normal tides. It’s also a common occurrence during the autumn and winter months where a combination of fluctuations in atmospheric pressure and southeasterly winds bring large inflows of water into the lagoon (Turismo Venezia). Although the acqua alta is a natural phenomenon, it has increased in frequency devastating the city with severe flooding.

Venice has been affected by land subsidence. This indirectly enhances acqua alta events causing extreme flooding in the lower levels of the city (Momigliano, 2019). The Venitian aquifer system consists of six aquifers with a majority of them having a history of being over-exploited (López Geta, 2003). USGS compiled geodetic surveys of the average piezometric level in different places of the Venetian area are plotted versus time and identified two prominent periods that can explain contributing factors to Venice’s subsidence (Carbognin, et al., 1977). 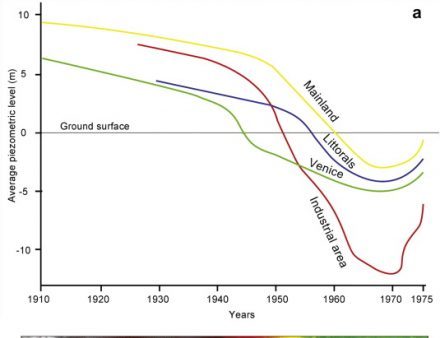 Prior to the 1940s, the use of artesian exploitation was minimal and it is assumed that the subsidence was due mostly to natural causes such as plate tectonics and natural compression of sediments beneath the city (Carbognin, et al., 1977)(López Geta, 2003)(Momigliano, 2019). Between the 1940s – 1970s demand for groundwater rose with the increase of industrial and agricultural development. Groundwater continued to be actively withdrawn until the 1970s when the government stopped the practice. The result of over-extraction caused a subsidence of approximately 12 centimeters (Handwerk, 2016).

A recent study in the journal Geochemistry, Geophysics, Geosystem compared data on elevation shifts, GPS, and space-borne radar to track Venice’s elevation changes between 2000-2010 and found that the city continues to subside at an average rate of 1-2 mm a year (Carbognin, et al., 1977).

A city, beset by constant flooding, surrounded by salt water lagoon has some challenges to ensure fresh water availability to its residents. For centuries, Venetians carried water from the mainland they fled which was a risk in itself to take the journey. By the 9th century, they developed catchment systems with limestone filters collecting rainwater and stored them in underground clay cisterns. Venice’s population grew quickly with direct access when it accessed fresh water using over 200 wells spread throughout the city. The well water provided fresh water to Venetians up until the 1970s when land subsidence became a concern. As a result, wells were capped rendering their functionality. Towards the end of well usage, a cast iron pipe began being laid down under the lagoon connecting Moranzani to Venice by 1886 (Sebastian, 2018; Steves, 2017).

Venice does not have a complete modern sewage system throughout the city. Much of the city relies predominantly on the historical sewer system made up of masonry tunnels (termed gatoli). Wastewater would be collected and discharged to the nearest canal or lagoon. The underground conduits are built approximately 0.75 m below the seal level allowing for settling and flushing of wastewater (Gray, 2011). This system allows anaerobic processes to occur in the gatoli and act as a septic tank before the tide flushes the contents out into the lagoon (enabling aerobic processes) and into the sea (allowing for disinfection by the saltwater). (Gray, 2011)

Although this system is still used, 150 decentralized aerobic treatment plants – membrane bioreactors (MBR) and sequencing batch reactors (SBR) – are scattered throughout the city. Decentralized treatment is managed as a stand-alone plant which allows for the collection, treatment, and dispersal of wastewater (EPA, 2007). The type of treatment plant at a location is based on space available.

SBRs is an activated sludge system that can carry out various treatment operations like equalization, aeration, and clarification in a single batch reactor (EPA, 1999) (Arvanitoyannis, et al., 2008). The SBR, in its design, occurs as a batch treatment process. It mixes and aerates untreated wastewater, allows solids flocculation and separation to occur, discharges treated water into the canal, then continues to repeat this process. (Gray, 2011)

In 1966 Venice recorded a historic flooding of 194 cm which caused massive loss of life and property damage. To maintain its resilience against the rising tides and land subsidence, the government asked engineers to build a barrier to keep the city safe from the rising tides. The project started to take form with proposals in the 1970s. Studies took place to better understand designs and environmental impacts between 1973 and 2002. With final approval in 2002, the MoSE Project construction commenced the following year. MoSE (an acronym, which comes from Modulo Sperimentale Elettromeccanico, coined after Moses’ biblical power to part the sea) is one of the largest civil engineering endeavors of the world (Bendix, 2018).

The MoSE system is located at the inlets of Lido, Malamocco, and Chioggia. The MoSE is a series of barriers made up of mobile gates laid at the bottom of the sea bed spanning 92 ft long and 65 ft wide. Barriers are supported by steel and concrete pilings driven deep into the lagoon bed. (Gray, 2011)

At its inactive state, the gates are full of water. In the event of a high tide, compressed air would be injected into the gates in order to empty the water. As water exits the gates, axis hinges would rotate and give rise to the barriers above the surface of the water to prevent the tides from the Adriatic Sea into the Venitian lagoon. If this project is successful, it will provide relief to Venice. (MOSE Venezia; Goodell, 2019)

However, MoSE project has been plagued with corruption, cost overruns, and prolonged delays ultimately resulting in the failure to meet the expected completion date in 2011. Underwater casings have eroded from corrosion, mussels have fastened themselves tightly to the hinges, and underwater drone images indicate that the floodgates have rust and fouling on the sluice gates. (Il Messaggero, 2018) With the engineering and design problems needing to be addressed, the MoSE is expected to be operational in 2022. An approximate $1.7 billion dollar project had ballooned to $6 billion dollars. (Goodell, 2019) Significant criticism surrounds the MoSE due to its limitations. Like any technology, it will soon become outdated- MoSE was designed to address problems from years ago with shortsightedness of increased sea level rise. The design only protects Venice from two feet of sea level rise and does not meet the needs of further sea level rise.